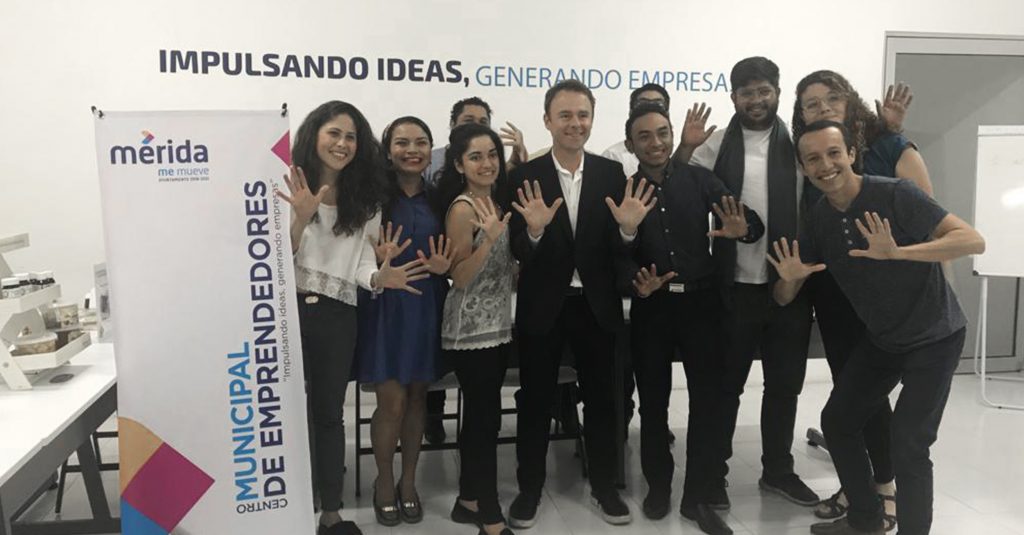 The Exciting Rise Of Entrepreneurship in Mexico, And The Lessons Every Market Can Learn From It

Hello again! I’m back from an exciting, inspiring, and illuminating tour of Jalisco, Yucatan, Aguascalientes, Campeche, and Mexico City. While there I spoke in universities, co-working spaces, government-sponsored entrepreneurship centers, and company meeting rooms, all for something in which I believe deeply - continuing to spread the word about Emprendedor 10%- the Spanish-language edition of The 10% Entrepreneur - as well as  contributing to the incredible entrepreneurial momentum already in motion all over Mexico.

In the not-so-distant past, the biggest obstacle to entrepreneurship in emerging markets like Mexico was access to capital- there simply wasn’t enough local investment on the ground for people with great ideas or innovations to get the funding needed to get started. In Mexico, historically, there wasn’t much action outside of Mexico City- no infrastructure for a creative, disruptive entrepreneur in the small towns and local markets. Their best hope for an aspiring entrepreneur was to take the show on the road or to use his or her network to attract foreign investment- two things that aren’t always an option for local, first-time entrepreneurs.

The digital revolution and the globalization of markets has changed all of that forever. Now, there’s startup capital everywhere- if you’ve got a smartphone, you’ve got access to a world of venture capitalists, and if you’re on social media, you can build local brand awareness yourself.

Mexico, like other emerging markets, also has a fascinating advantage over even large, wealthy markets like the United States in its agility- the Mexican market isn’t saturated with an overpopulation of entrenched, old-style industries and infrastructures: emerging opportunities are modern and innovative in part because they’ve got plenty of room to spread their wings without having to knock down a market full of dinosaurs first.

So, what are some of the most interesting revelations from my whirlwind tour? 1. Investors have emerged in EVERY sector, and are interested in EVERY proposition.

There’s a digital consulting and design company in Guadalajara called Wizeline; its founder, Bismarck Lepe, founded the nonprofit Startup GDL (Guadalajara). Startup GDL’s mission is to turn Guadalajara into a tech hub, doing this in large part by creating education and apprenticeship programs to fast-track hard working entrepreneurs into the the raw material for building winning companies.  Plus, what Lepe does at Wizeline is particularly amazing to me: he created a fund to back the 10% ventures of Wizeline employees. On the public level, many states- as well as the federal government of Mexico itself- have a Head of Entrepreneurship. My biggest talk was at the government-sponsored IYEM, the Yucatan Institute of Entrepreneurship, hosted by its dynamic director Antonio Gonzalez Blanco. This amazing space is all about educating and incubating startups, as well as providing the infrastructure to create fertile ground for an economy that driven by entrepreneurs (i.e. they provide workshop space, consulting services, and even access to communal resources like industrial 3D printers). I was also invited by the US Consulate in Guadalajara to speak at the Benjamin Franklin Library, a library that is sponsored by the U.S. consulate to promote cross-cultural communication and offer education services and resources courtesy of American guests, like me!

On a more informal level, I saw privately-led incubators everywhere, leaping on every kind of new market offering- from powdered honey food supplements to dog trackers. The days of scarce startup capital are over in Mexico.

2. Entrepreneurs are emerging from all ages, backgrounds, and positions in life.

3. I didn’t realize the impact or evolution of things I’ve done, and sometimes the effects of our actions in the long run are impossible to imagine. I gave an interview on live TV- Canal 44- and realized that for the first time, after all these years, I didn’t want to throw up before OR after doing live TV! I was as cool as a cucumber, if I do say so myself.  Or as the Mexicans say, I was “feliz como una lombriz.”

At this point, I’ve realized that I have enough experience to believe in my message without doubt, be comfortable in my own skin no matter what the context is, and feel GENUINE when I speak. It’s taken so long to feel effortless about these things that I’m acutely aware of their value- it’s a precious thing to be able to put yourself out there confidently, and the only antidote to nervousness is experience. If you go up to bat a thousand times, the butterflies will disappear.

Later in the evening after my Channel 44 talk, I stopped into the Franklin Corner, a discussion group at the aforementioned Benjamin Franklin Library. A man who had never taken in any entrepreneurship programs showed up because he had seen me on TV earlier that day. Another gentleman walked into a lecture at Meridia carrying his copy of Emprendedor 10%. “It was like reading my life on a page,” he said to me, explaining he was the founder of 3 companies, all of which were 10% ventures. Entrepreneurship has become so embedded in the fabric of Mexico’s modern economy, even in places not known for it- in universities, communities of all sizes, and government-backed initiatives- that it can’t be put back in the box. It’s growing quickly and creating new opportunities and challenges. Investment from every sector of the Mexican economy- public, private, academic- has spurred an undeniable movement: this flavor of startup stimulus is creating jobs, attracting investment, and supporting the development of infrastructure. What I observed in Mexico affected me profoundly; I fully intend to incorporate the success stories I witnessed there into my work elsewhere in the world, particularly to engage with officials at various levels of government, to instill this powerful truth: every country, state, and city needs a Head of Entrepreneurship. Every economy should be investing in their entrepreneurial sector- the returns on this investment are huge.

On a personal level, I came to realize that you can work on a million random things and not know where they’ll go until much later- if ever. All of the hard work I’ve put into Emprendedor 10% is paying off, I just needed to go and see it for myself. It’s a singularly rewarding experience to meet people who have been in your extended community for years whom you never knew. There’s always a new place you can go.The truth is, if you’re reading this, we’re all members of that kid’s entrepreneurship club in Campeche.

We just have to reach out and say hello.