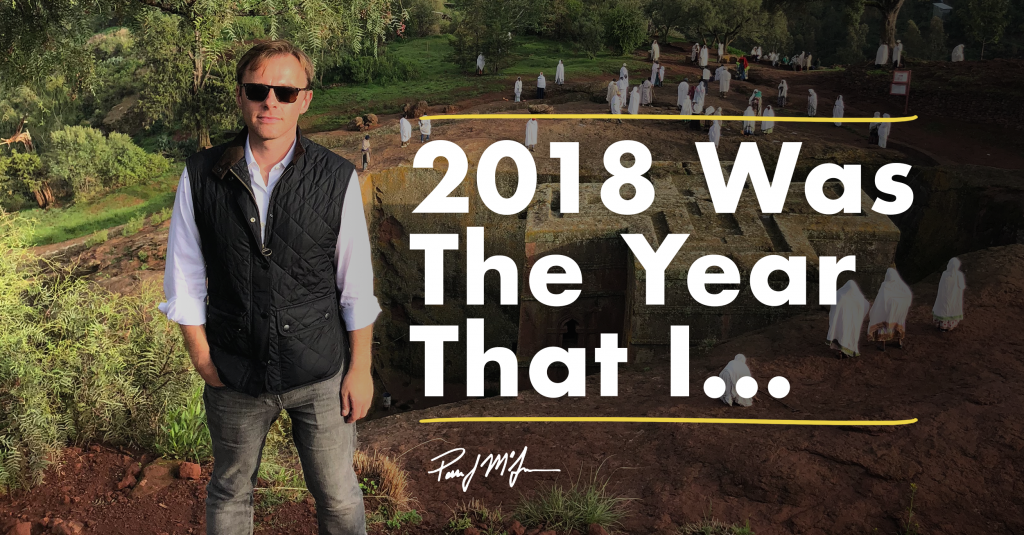 As the year draws to a close, I feel that it’s time to take stock of the year that was 2018, for myself and the world around me.  I don’t know about you, but for me, 2018 felt transitional: our world is changing in so many ways that it feels impossible to know what things will look like a year from now.  It’s scary, exciting, wonderful, crazy, and scary again, all at once. The only way to overcome fear is to embrace it, shine a light on it, and rob it of its mystery, a critical source of its power.  Unless it’s a crocodile or a bear. Do not embrace those under any circumstances. Unless the bear has been properly trained.

Now that’s cleared up, I’d like to share what 2018 taught me and the implications for the future- and afterwards, some very exciting news!

…Realized that FOMO has Me All Over The Place

Part of why 2018 felt so transitional was that I was constantly on the move.  Over the last 12 months, I traveled to 15 countries- 7 new ones (Bangladesh, Myanmar, Senegal, Cote d’Ivoire, Israel, Palestine, and Ghana) and 8 return visits (Jamaica, Mexico, Ethiopia, Turkey, France, Jordan, Egypt, and Canada). I also reached a new milestone- Ghana was the 90th country I visited. If you rolled your eyes, I don’t blame you.  Anyone who tracks their travel on a spreadsheet (as I’ve done for more than 10 years) is clearly a little cray.  The truth is that I love to travel and I’m very lucky that the vast majority of it is to places that I find super interesting.  As a result, I have trouble turning down opportunities to do so- I have massive FOMO thinking about the adventures that lie in all of these far off destinations.

If you’re rolling your eyes again, I still don’t blame you.  I’m not complaining- but there’s a fine line between chasing the wanderlust and overcommitting to the point that other things suffer.  When everyone you run into starts conversations with, “Dude, you’re never around,” then that tells you something: you are “all over the place.”

In 2018, I learned that travel is kind of like ice cream: I can eat a ton of it, it’s delicious and addictive- especially if it’s pumpkin flavored-  but at some point you’ve just had enough. The challenge is to know when to stop. That’s my big priority for 2019- if anyone has any tips, send them my way.

…Started to Call People Out on Their FOBO

2018 was a big year for FOBO.  The long-forgotten sibling of FOMO finally got its due, and I was in the thick of it.  I talked all about FOBO with outlets like The New York Times, Cosmopolitan, and Inc. In doing so, I tried to spread what I’ve long believed: FOBO, and not FOMO, is the far more damaging FO.

Surprised? I guarantee you’ve been a victim of someone’s FOBO- the reason some people never commit to plans or bail at the last minute with a very flimsy excuse.  It’s the persistent flakiness that makes personal and professional relationships toxic, and it’s very 2018.

That’s why I decided to start calling people out- including myself- on their FOBO.  I’ve had it with FOBO- it’s a prison of your own creation, and I don’t want to be stuck in someone else’s prison. When I sense that I’m dealing with someone’s FOBO, I call it out, decide how I want to move forward, tell the other person what I plan to do, and do it.  If they join me, that’s fine- if not, also fine. To them I say “thank u, next.”

By recognizing that you can’t count on people with FOBO, you save yourself a lot of heartache and headaches.  They’re also doing you an unexpected favor- causing you to decide for yourself what you actually want and take action- with or without them. They may be trapped by indecision, but you’re not. You’re free. In 2017, I spent a day visiting Syrian refugee camps in the Bekaa Valley of Lebanon.  I spent time talking with families about what their lives have become since war forced them to leave everything and move to a new country.  I realized these families were in limbo- they couldn’t go home, but couldn’t set up new lives in Lebanon. Even worse, the children I met had to work in the fields and most couldn’t go to school. To see children working for subsistence wages and missing out on their education made me physically ill.

I came away from that day completely hopeless: I got back to my hotel, crawled into bed, and passed out for a few hours, my heart and mind overloaded.  When I woke up, I resolved to find a way to help somehow, to have an impact- but I didn’t know how. Rather than running around, I decided to let the answer come to me. I kept an ear to the ground, listened, and waited.

A few months later, I learned that friends of mine at Sesame Workshop (yes, where Big Bird, Cookie Monster, and Elmo work!), were working with the International Rescue Committee to apply for a $100 million+ grant from the MacArthur Foundation.  If they won, they’d use the capital to create early childhood development programs for Syrian refugees. Specifically, they’d focus on displaced children in Jordan, Lebanon, Iraq and Syria, trying to reach them in the critical period of their brain development. I told them about my own interest in the topic and tried to connect them with anyone I thought could be helpful, such as the woman who had taken me out to the refugee camps over the summer.

Amazingly, Sesame Workshop was awarded the $100 million- even more amazingly, they invited me to join their newly formed Leadership Council! I’ll help Sesame in any way I can to achieve its ambitious goals in the Middle East and elsewhere- and I’ll do it 10% Activism (as coined by my friend Dan Brendtro) style. As with 10% Entrepreneurship, you don’t have to quit your day job to make things happen. Also, I can hang with my guys Grover and Cookie Monster. Perks.

The 10% Entrepreneur has been translated into a bunch of foreign languages- which gives me the opportunity to travel all over the place talking about entrepreneurship.  I’ve gotten to see with my own eyes what FOMO has become- whether in New York, London, Sâo Paulo, or Cairo, people seem to know all about FOMO. Often, when folks discover my role in its history, we end up taking selfies. It’s kind of insane, but it’s taught me something:  FOMO is a universal emotion and it’s time for me to step up and bring my own voice and perspective to the global conversation.

That’s why I launched the FOMO Sapiens podcast. I wasn’t so sure that I wanted to do a podcast- I’d toyed with the idea in the past, but always maintained that I’d only do it if (i) the quality was professional and (ii) I would have solid distribution.  Then, out of the blue, Advertising Week suggested doing a podcast. I figured I was out of excuses, so it was now or never. Six months into FOMO Sapiens, I know I’ve made the right decision.  I’ve made plenty of mistakes, but I’ve gotten better at conducting interviews, choosing guests, and deciding what the show is really about.  Plus, tackling this project like a 10% Entrepreneur lets me be thoughtful about tailoring the show to my time and resources- while I’d love to release a show every week, I can only handle two episodes a month right now, and that’s going to have to be good enough, FOBO be damned.

Which brings me to my big announcement!  Drumroll, Please…..

I’m writing another book!  Just a few days ago, I signed a deal with Sourcebooks to write about FOMO and FOBO under the working title “FOMO Sapiens.”  I’m very excited about the topic and the publisher. Sourcebooks is one of the most innovative publishing houses out there, and they totally get me and this project.

With the ink dry on the deal, I’m psyched to take a little time away from day to day life in early 2019.  It’s a daunting project, to say the least, but I’m fired up. I’m also fired up to hear from YOU as I write this book.  If you have amazing stories, insights, or people to interview on the topics of FOMO and FOBO, email me at letconnect@patrickmcginnis.com.

It’s not that I didn’t say thank you this year (my parents raised me way better than that!), but I’m certain that I could have said it more often- because let me tell you something, I’m so *#?@^ grateful for so many things.

So thank you.  Thank you for your ideas, your enthusiasm, your support, and your friendship. No matter where you live or how you celebrate the holiday season, I hope that it’s epic.  Take some time to rest up – 2019 is going to be legendary.